Bergama Theatre Festival is an innovative festival of history, culture and the city, which first took place in 2018 and with the idea of creating a basis of constructive discussions by taking inspiration from the historical and organic connection between Berlin and Bergama that has began with the relocation of the Altar of Zeus to Berlin. The festival aims to open up a space for special experiences with the history of Bergama and the rooted theatrical tradition.

BTF aims to make Bergama a meeting and sharing point in the field of cultural policies and theatre both in the region and nationally; with all local and international works included in the program each year, as well as with the co-created projects it’s developed and relationships that’s been established. To realize these foodsteps, the festival team grows each year with new local team members from Bergama and strenghtens its bonds the local community day by day.

After its first edition in 2018, that BTF met with its audience and Bergama for the first time with the program focused on how the relationship between these two cities reflects on the artistic production; a two-year compulsory break took place and later, Bergama Theatre Festival was reborn with its second edition in 2021 to become a sustainable, sharing and transforming festival.

Since this new beginning, the festival has been focusing on four main pillars during the creation processes of each year which are; “Localization” aspect by developing its relations with artists and producers in the region, “Sectoralization” steps that supports capacity development and the professional scene, along with the effort on creating an equal and accessible environment for Arts & Culture in the path of “Accessibility of Social and Cultural Life” part and lastly, “The Participation of Children and Young People in Arts & Culture” focus that Bergama Theatre Festival has gives high attention to the audience of today and tomorrow, festival’s friends, and possibly the future team members and artists & creators. May our meetings never end, where a sustainable, changing and transforming structure that affects and influences various stakes together with the audience and Bergama for many years! 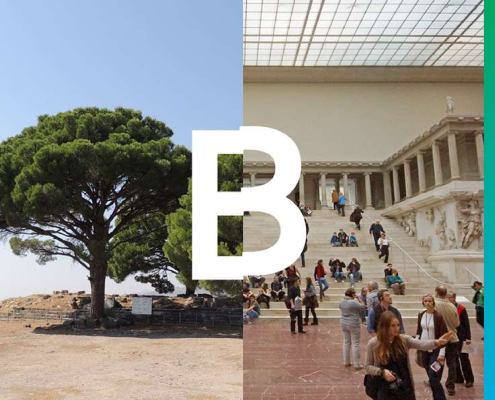